SUBSCRIBE AND DISCOVER ALL THE PRIVILEGES FROM GRAND HOTEL RESIDENCIA*****GL

Gran Canaria forms part of the Canary Islands in the Atlantic Ocean, 210 km from the coast of Africa. Its capital is Las Palmas de Gran Canaria and the island gives name to the province of Las Palmas which also includes the islands of Lanzarote and Fuerteventura.

The Canary Islands have an interesting history, stretching to the present day from the arrival of the first inhabitants, generally known as 'Guanches', and its later settlement by the Castilians.

The native inhabitants of the Canary Islands are probably descended from the Berber peoples of North Africa who used the ocean currents to reach the islands. Little remains of their culture, apart from traditional costumes, place names and other reminders of the past. Settlement by the forces of the Spanish crown took place in the year 1483. From this time onwards there were rapid changes in the political and economic structure of the islands, because they became a stopping point on the voyage to America. Their resulting economic prosperity made them a target for attacks by French, Dutch and English freebooters during the sixteenth century.

In the modern age tourism is the mainstay of the economy of the Canary Islands, while strong growth has also been encouraged by the development of the building trade, the ports and agriculture, which exports tomatoes and bananas on a large scale.

Because of its range of climatic zones and ecosystems the island of Gran Canaria is regarded as a kind of miniature continent of its own. It has an area of approximately 1,560 km², a coastline of 236 km and its highest mountain, 'Pico de las Nieves', rises to a height of 1949 m. 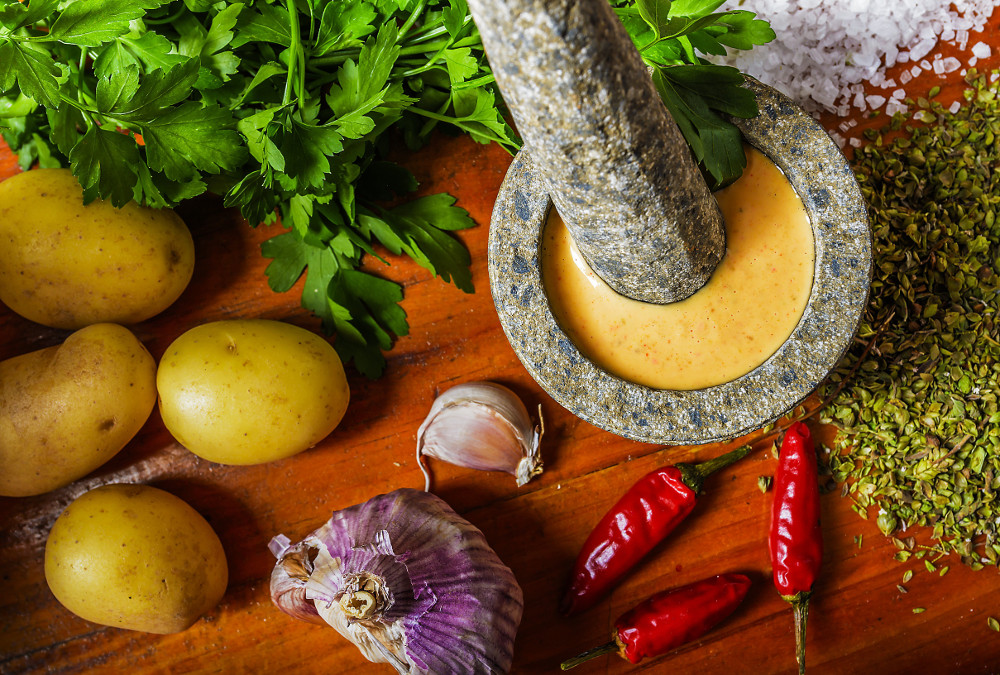 The cuisine of the Canary Islands is a fusion of culinary influences from different continents. Over time this has developed in particular because of their location in the Atlantic and proximity to the coast of Africa. The origins of this cuisine go back to the food of the native inhabitants during the pre-Spanish era, which include dishes with typical names such as gofio (a kind of porridge made from roasted grains of cereal) and baifo (goat's meat).

After the islands were conquered by the Castilians the cuisine of the Canary Islands was exposed to influences from both sides of the Atlantic, which is why today it features such a breathtaking mix of aromas - resulting not just from these different cultures but also from the climate and natural features of the islands themselves.

As you can see, the Canary Islands cuisine has been influenced and accompanied by a fascinating history of great significance. Modern Canaries cuisine is currently in search of a new identity, without forgetting its roots and the outstanding indigenous products of the islands such as cheese, honey, bananas, seafood and fish.

The culinary tradition of the Canary Islands offers uncomplicated dishes which highlight the quality of their ingredients. There are no recipes which are found uniformly in all the Canary Islands – instead every family and region has its own way of preparing dishes.

You can begin your meal with tapas such as the famous 'papas arrugadas' (wrinkled potatoes) with mojo sauces, or slices of roast pork hock. Because of the small portions you can try a large variety of dishes such as gofio, stews, fish and rabbit in a spicy sauce. Your meal is rounded off by tasty desserts such as bienmesabe (almonds, honey, eggs, lemon and cinnamon) or sweet gofio mousse (bananas, gofio and sugar). Our recommendation for a night-cap is a glass of the famous Canary Island rum or a version of it with honey. 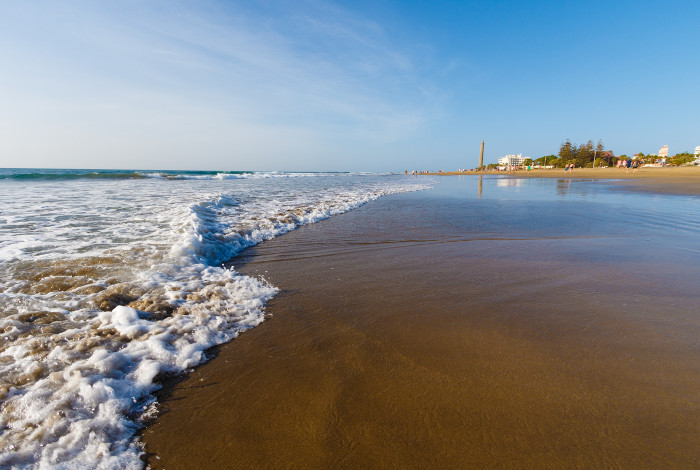 In the vicinity of the Hotel

During your holiday in Gran Canaria you will experience the highly diverse beauty of the Canary Islands while you explore the green north of the island, the golden sandy beaches of the south, the famous dunes of Maspalomas and charming villages in the interior of the island.

You will experience a rich diversity of impressions within a relatively compact area – it is no coincidence that the Canary Islands are often referred to as a "miniature continent". 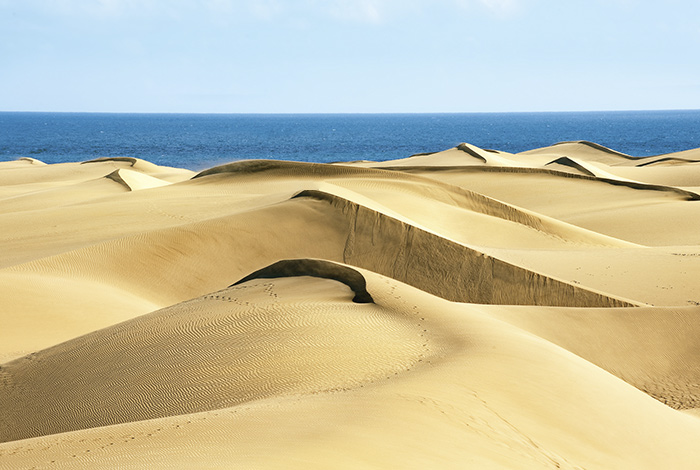 The nature reserve begins nearby the Seaside Grand Hotel Residencia and covers the lagoon and the dunes, behind which the beach begins. This delta with its 404 hectares is rich in migratory birds, including majestic herons, ducks and lively sandpipers. The flora of the area is also home to the well-known Maspalomas giant lizard, a harmless species which can reach a length of 80 cm.

The dune landscape of the south is unique to Gran Canaria. The dunes, some of which move when blown by the wind, can reach a height of 8 m.

The golden sandy beach of Maspalomas is about 6 km long and begins in the south by the oasis of Maspalomas - only a few minutes on foot from the Seaside Grand Hotel Residencia. On the beach you will see a blue flag fluttering – a sign of outstanding water quality and infrastructure. Equally impressive is the promenade, which enables you to stroll, hike or jog for long distances along the coast. After sunbathing you can enjoy a dip in the sea at water temperatures between 18 and 23° C. The beach also has a nudist area, together with sunbeds and kiosks. 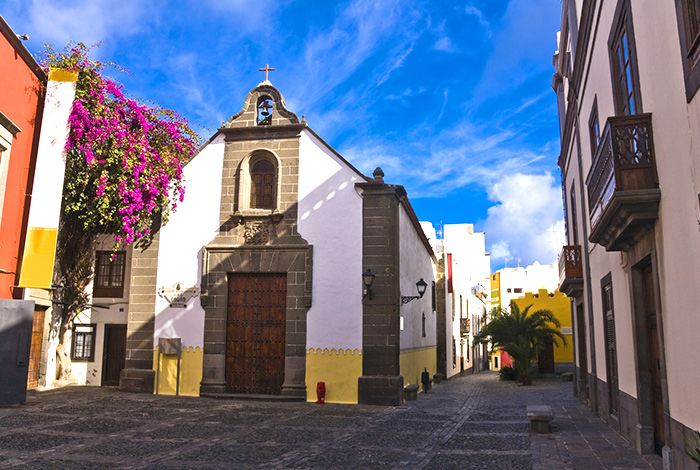 From our Seaside Hotels you can reach Las Palmas de Gran Canaria, the capital, in under an hour by car. Here you will also appreciate that the Canary Islands have a lot more to offer than sunshine and beach holidays, wonderful though these are. In addition to attractive shopping outlets you will find a wealth of cultural and entertainment facilities here.

There's no doubt that a visit to Vegueta, the historical quarter, will be one of the many highlights of your holiday. Here in the old city you can visit the cathedral (built between 1497 and 1781), Casa de Colón and the Vegueta market. 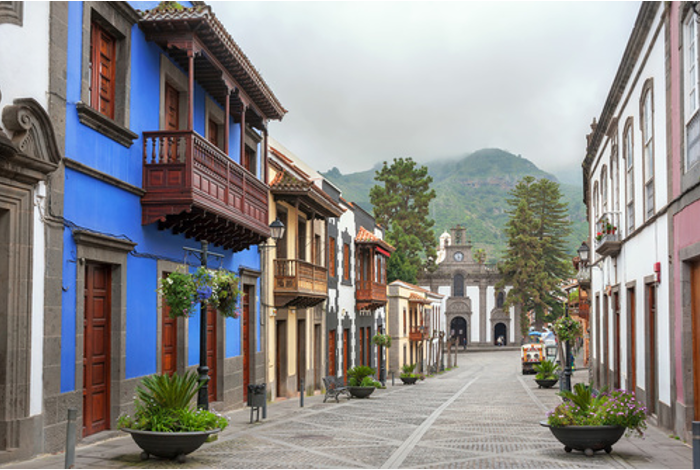 Villages on the island

Gran Canaria makes it easy for you to find villages of outstanding beauty.

Tejeda is situated in a valley surrounded by beautiful scenery. Here you will find an impressive natural formation, Roque Nublo, a 67-m high monolith which is one of the landmarks of the Canary Islands.

Alternatively you can visit Arucas, a village well-known for its rum and built around the church of San Juan Bautista (1909), the altar of which features an image of Christ on the cross which was carved in the 16th century.Near Arucas the village of Firgas is well-known for its views of the coastal region and for its mountain spring water. The majority of people in Gran Canaria have this high-quality water delivered directly to their homes.

Teror is home to the patron saint of the diocese of the Canary Islands "Nuestra Señora La Virgen del Pino". In this place of pilgrimage a popular festival is held every year on 8 September. You can also visit the "Museo de los patronos" museum here and see the beautiful "Plaza de Tereza Bolivar" square. The sweets made by the nuns of the local Cistercian cloister are much appreciated by those in the know. If you get the chance you should also try the sweet blood sausage “morcilla dulce”.

You will find out that in addition to its beautiful coastline and mountain villages Gran Canaria has plenty more to offer. Why not take a map and go on a tour of personal exploration. We'll be happy to help and advise you!

Other sights worth seeing 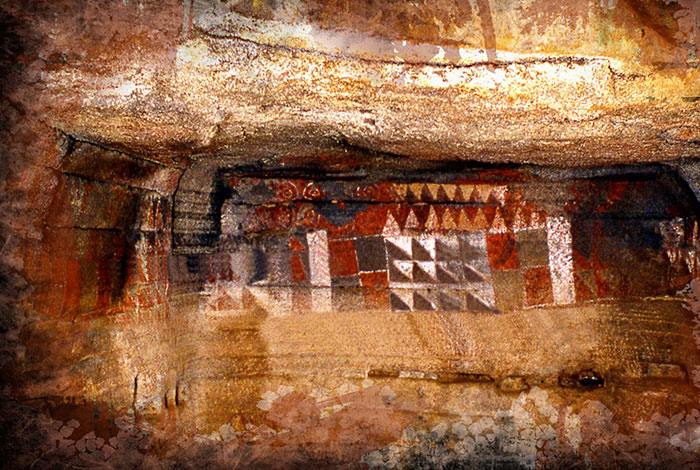 In "Cueva pintada" a cave in Gáldar, you will experience the culture of the original inhabitants of the Canary Islands. The museum here is itself constructed on the remains of an ancient settlement and provides impressive views of wall paintings and historical objects of all kinds. 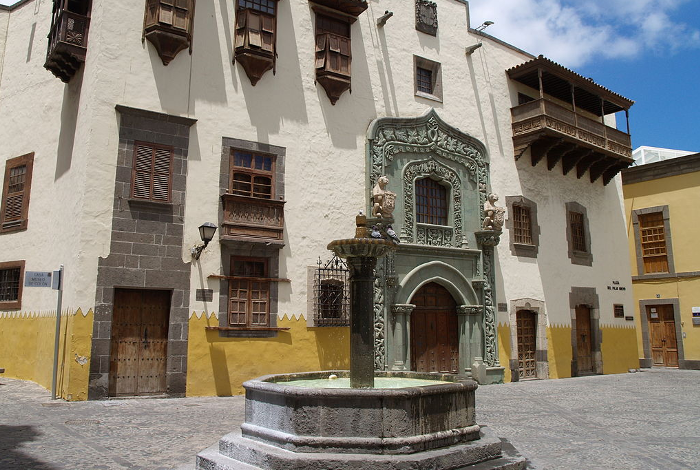 "Casa de Colón" was the residence of the former governors of the island and was probably visited by Columbus during his first voyage to the Americas. The museum of the same name provides detailed documentation and other exhibits relating to the conquest of the islands by the Castilians, the visit of Christopher Columbus and pre-Columbus America. 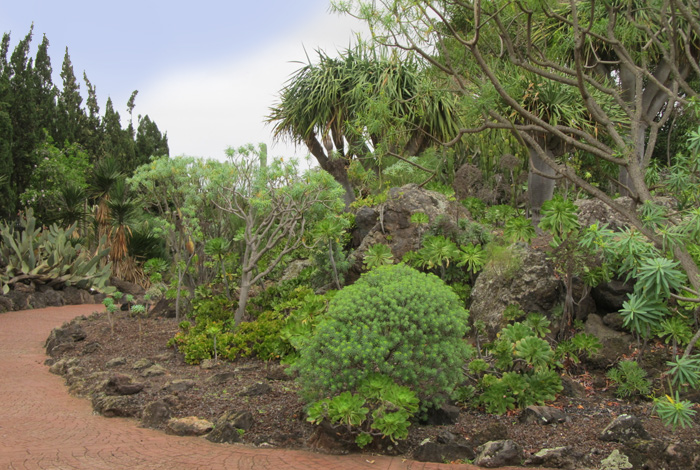 With an area of about 10 hectares the "Jardín Botánico Viera y Clavijo" botanical gardens display the full flora of the seven Canary Islands, together with the plant life of Madera, the Azores and the Cape Verde Islands. 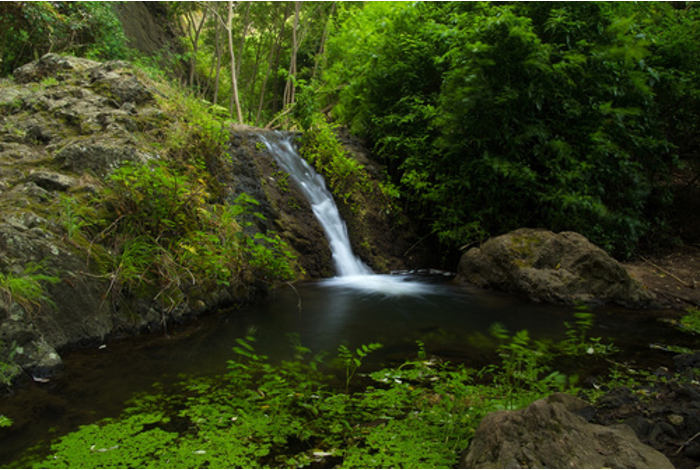 You will find a very special nature reserve at "Los Tilos de Moya", a gorge near Moya which, on an area of 91 hectares, contains an abundance of laurel bushes and lime trees. 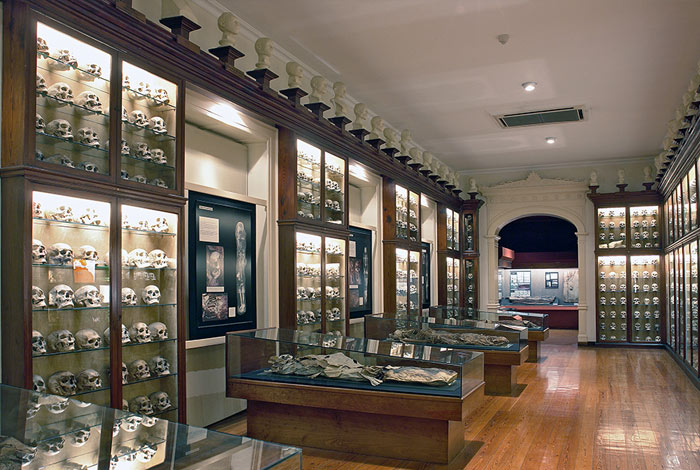 Museo Canario displays the most extensive collection of the cultural heritage of the original native inhabitants of the Canary Islands. The museum is home to the complete archaeological collections of the entire Canaries archipelago, and with its unique selection of exhibits is a wonderful place to get to know the history of the islands. 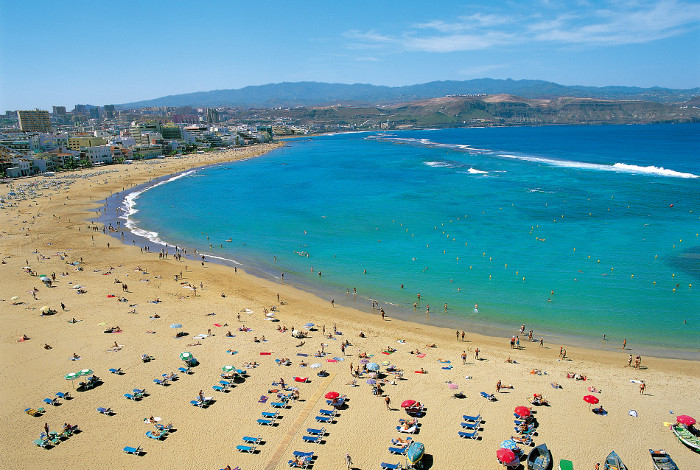 Considered one of the best urban beaches in the country, Las Canteras beach will not disappoint you. It is located in the capital of the island, Las Palmas de Gran Canaria and is one of the places most frequented by locals. The seabed is a refuge for endless types of fish, making it the ideal place for lovers of snorkeling or scuba diving.

Here sport is always at the forefront, being a meeting point for surfers and those who practice kayaking or paddle surf and you will also find locals playing beach ball or football. The particularity of this beach is its famous natural reef, which breaks the currents of the Atlantic. You can access it by swimming from the shore and enjoy a privileged view. The beach of Las Canteras has the Q flag of Tourist Quality, the Blue Flag of the European Union, the ISO Certificate of Environmental Management and the Universal Accessibility Certificate, thus making it one of the best rated beaches in Spain.

Festivities in Gran Canaria there are many and all are great fun. Most of them are of a religious nature, although they are also mixed with many pagan celebrations of pre-hispanic background originating from the Canarian aborigines or Guanches. 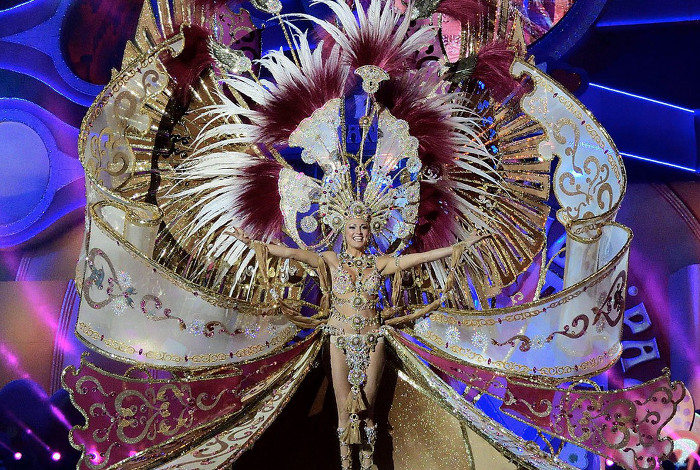 The carnivals of Gran Canaria are the most popular holidays on the island. They are celebrated in almost all the municipalities, mainly between the months of February and March, being the carnaval of Las Palmas and Maspalomas the most visited. There is healthy rivalry between the Carnival of Tenerife and Gran Canaria which encourages its progression. 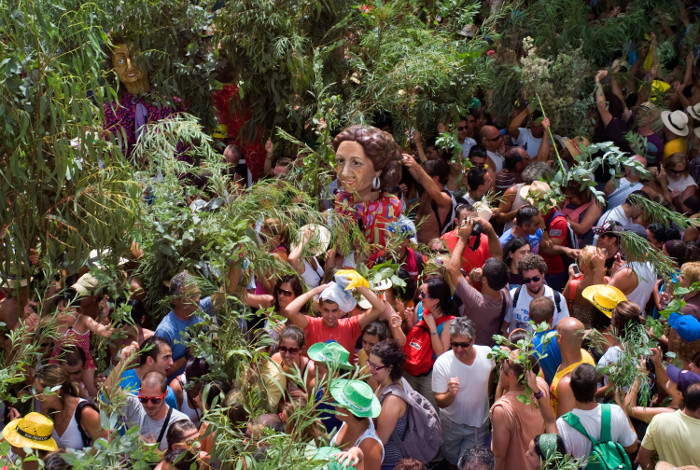 Among the pagan festivals that were disguised as catholic after colonization, we can mention the descent of “La Rama de Agaete” which is celebrated on 4 and 5 August. Currently, it is celebrated in honour of “Nuestra Señora de las Nieves” (Our Lady of the Snow) but it is believed that it originated from an aboriginal ritual to ask for water. 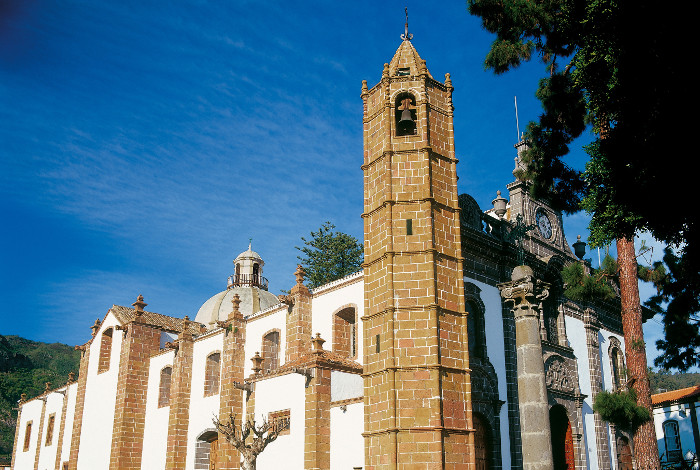 The Fiesta del Pino is the most important festivity on Gran Canaria and is celebrated on 8 September in honour of the Patron Saint of the island “Nuestra Señora Del Pino”. The evening before a pilgrimage to Teror takes place to make an offering to the virgin of the pine, with representatives there from all 7 of the Canarian municipalities.